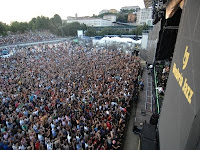 In my youth I argued continuously with my father about just about everything. One disagreement I remember particularly well was between his assertion that the purpose of General Motors was to make money and my counter argument that its purpose was to make cars. If he were still around today, Buick would have at least one faithful customer and we would probably be having the same argument, but it turns out that GM has failed us both.

Despite lack of agreement over just what its mission was, there’s little doubt that mission drift was central to the bankruptcy of the company. Instead of just making cars efficiently, GM got into providing health care for its workers and financing for its customers, with disastrous long term results.

I once had some stock in ITT, which had been International Telephone and Telegraph before it started making Wonder Bread, renting cars and running hotels, until it diversified itself out of existence.

In the public sector, the US Department of Defense became so immersed in creating weapons systems for unlikely wars, and promoting unnecessary wars to use or sell the products it developed, that a whole new Department of Homeland Security had to be invented to assume the neglected original core functions of the DOD.

Money is a strong motivator, as essential to most types of activity as air is to fire, but unbeknownst to GOP politicians, there are other reasons for doing things, and when money starts to drive out the other motivations, we often see the entity lose focus and degenerate. Local events here have recently brought this to mind more than ever.

Umbria Jazz was founded in 1973. Its mission seemed to be to enrich the cultural life of Umbria by providing a showcase for this vital modern music. Carlo Pagnatta was genius at organizing the festival, and if the mission was as I’ve outlined, his success was phenomenal, despite a few bumps in the road in the early years. He managed to line up governmental and private sponsors along with the world’s best musicians. The festival took off, to the point of expanding to Orvieto for a winter version, and occasionally to places far beyond. I believe the organizers still do truly love jazz but the sponsors and city fathers may love the festival even more. Seeing how much money tourists bring to the city to hear jazz, apparently somebody decided that even vaster sums could be generated by bringing in pop groups to appeal to the wider public. There is still some wonderful jazz at Umbria Jazz but the main concerts are now in a stadium (shown above) instead of the smaller and magnificent Frontoni Gardens. This year’s headline performers included such jazz greats as the Simply Red and Burt Bacharach. No doubt the money pouring into Perugia is more abundant than ever but the festival is well past its glory days as a cultural event. Celebrity sells! Maybe next year we’ll see Berlusconi’s teenage friend Noemi Letizia brought in as mistress of ceremonies.

Here in the little village of Acqualoreto we’ve just held our summer festival. The festa pays for itself and it has paid for the opening of our small clubhouse and bar. We have events such as an art contest, a bocce tournament, theater, a card tournament, concerts and film, all designed to enliven the village and entertain the people, although since we’re in Italy the vast majority of activity revolves around eating. So far it has worked fairly well, but I do see a tendency to value the events in terms of how much money they bring in rather than how much they contribute to the community. Lotteries are a big hit with the committee. They contribute nothing to village life but they do bring in reams of money.

Yes, money is important. GM factories and jazz festivals go silent without it and when our little festa loses money, that will be the end of it. But as we’ve seen with Enron and Bernie Madoff, the health insurance companies and the banksters, when money becomes the only motivation, the world becomes a desert.
Posted by Robert at 4:34 PM No comments: