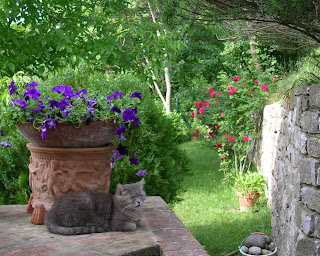 I listen to a lot of music. It started with records, then cassettes and more recently CDs. There was, and is also the radio, from Symphony Sid and Mort Fega after midnight in the sixties to WBGO on the Internet 24/7 these days. and the music just keeps on coming. Recently, my Irish neighbors lent me CDs of violin concertos played by Anne-Sophie Mutter and Irish folk music by Martin Hayes and Sharon Shannon; my supernaturally generous friend at Blue Note sent me a lot of music, ranging from the completely new to me Rosanne Cash to my longtime favorite Patricia Barber; one son-in-law, who is putting all his CDs on a monster hard drive, has presented me with a CD of the master takes of Charlie Parker with Strings as well as a 4 CD anthology of the blues. The wonderful Italian magazine Jazzit arrived the other day with a CD of JellyRoll Morton, something I wouldn’t have known to look for, but which is a sheer delight to listen to.

Amongst all the music I’ve gathered over a lifetime, one extraneous sound has lodged in my memory. At the end of Gingerbread Boy on his Miles Smiles album, Miles Davis can be heard to say to his long time producer Teo Macero “Teo, play that-- Teo, Teo, Teo”.

In 1995 when one of my daughters rescued a litter of abandoned kittens from the courtyard of her college apartment in Perugia, she found homes for all but two. We already had seven cats but my wife and I share a weakness for cats. We’ve all learned from childhood that “a dog is man’s best friend” but I’ve never thought of a best friend as someone you can train to fetch your slippers or beg for food. Apparently my masochistic streak is dominant. Whatever the explanation, we took the two cats and I was ready for the next task at hand, which was to give them names. Miles had died four years earlier but that refrain was fresh in my mind and I said, “This one is Teo”. His sister, a dark and silky gray miniature panther, I christened Tina. We never trained Teo to do anything, apart from brief efforts to make him play goalie with a ping pong ball, and my main interaction with him was to comb and brush the burrs out of his long fur in the morning. He wasn’t smart. He was castrated and long experience has led me to believe that 60% of male cats’ intelligence resides in their testicles. Still, he was good company. At night when it was time for the cats to come in, I’d go out and call “Teo Teo Teo”. I can’t play a trumpet. I don’t play any instrument at all, but that nightly ritual has always kept the presence of Miles vivid in my mind, just as I expect that Miles’ music will continue to be a reminder of Teo.

Last week we took Teo to the vet to end his long battle with a tumor that made breathing difficult and eating impossible. Tina is now the last of our cats. She too misses Teo.
Posted by Robert at 11:10 AM 1 comment: