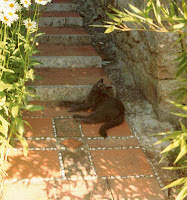 For the first time in twenty-five years our house has no kitty litter box. Tina, the last surviving member of our household feline population, which grew to a maximum of nine back in 1995, died on the third day of the new year. She was no longer mobile and clearly in considerable pain so we had the vet come and administer her terminal medication. Tina was a member of the family for seventeen years after our eldest daughter rescued Tina and her brother Teo from an abandoned litter in Perugia. Besides naming her, I tended to give her the nickname of Miss Italia because, with her velvety charcoal gray fur, she struck me as unusually beautiful. We miss her but at the same time I'm reminded of a joke our friend Jake Gruber once told us. A Catholic, a Protestant and a Jew were discussing theology, and the issue of when life begins came up. The Catholic says that life begins at the moment of conception. The Protestant says no, we believe that it starts at birth. The Jew then says no, you're both wrong; life starts when the dog dies and the children move out. At times like this, such feelings do emerge, along with a little guilt about having such feelings.

Most of my closest friends are, or have been, dog owners. I've never held it against any of them, even though I've never managed to bring myself to share their enthusiasm. With cats, it's different. I become blind to any defects I might otherwise be irritated by in people when I know they are good to cats. A case in point. Some time ago a man in our village named Crispoldo died. For years he had fought with his relatives and he had been rather hard on his immediate family, which consisted of his wife and their adopted niece, both of whom, as fate would have it, had predeceased him. He was a tough landlord and not a particularly friendly neighbor. And yet, Crispoldo loved his cats, and he was good to them. When he ate, they would eat first, or right along with him. While Crispoldo and I were not close friends, we got along better than there was any logical reason to imagine.

This week we got the sad news that another long-time neighbor, Antonello Aglioti, had passed away. Despite his living just down the hill through the woods from us, I only met or spoke with him on a few occasions, most recently a year ago when I asked him if he could provide a little creative spark for our summer festa. Unfortunately, I never followed up on that. Antonello was a theater and film director and set designer, as well as being a journalist who recently had his own TV interview show on RAI. Here in the village, he didn't mix very much. The most vivid memory I have about him was of a spectacle he invented, produced and directed during the town festival in Baschi some years ago.. The entire Comune (township or county) of Baschi, which includes about a dozen villages besides Acqualoreto, only has a population of 2800, but his show, which integrated music, dance, lighting, figures on stilts and fireworks, seemed like something you might see in Paris or New York. Amazing!

Besides his talent and imagination, the other thing I knew about Antonello was his love for cats.   My wife's sister-in-law Graziella, took care of his house and his cats. When he was in Rome, he would call up to see how the cats were doing.   She respected him and appreciated his concern and consideration.   Graziella herself is second to none in the care and feeding of cats.   Besides Antonello's large herd of almost a dozen, she feeds half the cats in Acqualoreto.

Antonello leaves yet another house vacant. Several years after his death, Crispoldo's estate has not been settled and his two houses remain unoccupied.   In an earlier piece I mentioned losing three members of our local international community last year.  At least two of them had cats.   Their houses remain unoccupied and their cats dispersed.   I saw a story in the New York Times about a woman from Italy who runs a cat refuge in North Carolina. If only she could come back to Italy and do the same thing here! Among the blogs I often read, Jeremiah's Vanishing New York documents and laments changes to the city, as businesses are forced out by gentrification's many pressures. As one business closes, another rushes in to take its place and sometimes, those leaving are pushed. Such constant change can be disorienting and demoralizing but change, whether good or bad, inevitably happens everywhere. Our problem in Umbria is hardly a too rapid turnover of people or businesses. When people here die or simply go somewhere else, they typically leave vacant houses behind, and those houses often remain empty for years, if not for decades. On a commercial level, we see the same in Todi, where many storefronts have stood vacant for twenty years or more. All these uninhabited places get to be a little depressing for those who remain. It's worse than depressing for the cats! Antonello is gone. May another Antonello appear!
Posted by Robert at 2:29 PM 1 comment: