The Great Wall of America is in the news again, after a series of distractions regarding Russian influence in the election and poisoned gas in Syria. President Trump started clamoring for funds for the Wall. That didn't happen and emergency funding to keep the Government running until September was passed without money for the Wall. The Mexicans haven't stepped up to fund it.

New distractions have emerged in the French elections, the push for Trumpcare in the House of Representatives, and the firing of Comey, but talk of the Wall may not go away for the next three years. 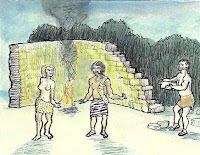 Walls have been around for a long time. While there is common agreement that prostitutes comprise the world's oldest profession, second place being contested between spies and pimps, coming from a related profession, I would argue that wall makers constitute the third oldest profession. Walls keep out the elements and provide for support for roofs in the case of building walls, as well as keeping out unwanted guests and other pests. Walls divide properties from adjacent ones, public from private spaces and sometimes define political boundaries. Low walls are largely symbolic but no less important in that they provide strong visual identities to some of those borders and boundaries in a less absolutist gesture.

Robert Frost is known for saying “good fences make good neighbors”. Oops, I think that was “fences” not “walls”. Actually he was arguing against both walls and fences with a neighbor who liked them. Fences are more or less lighter, more permeable versions of walls. Bill Clinton and George Bush built a big one along 831 miles (almost half) of the 1,954 mile long Mexican border. Preliminary estimates of the cost of the wall for the entire border are $21 billion but we all know what happens to preliminary estimates.

The Great Wall of China was built over several dynasties but much of it between 221 BC and 206 BC to keep out Mongolian nomads who were stealing the crops of Chinese farmers. Some of it was built by paid labor but slave labor and prisoners also contributed to its construction. A million workers died in the process. Depending on what source you consult, the wall extends for 13,000 miles or 31,000 miles. Whatever figure you accept, that's a lot of wall. Much of the wall is still there and it may have worked, or perhaps the Mongolians just renounced their nomadic ways.

Walls abound in Europe. Here in Italy remnants of them are everywhere. When my brother first visited us in Umbria and saw Todi, I expected the usual tourist reaction, such as “how lovely!” Instead, his first comment was “My God, what awful lives those people must have lived”. Todi, like most old Italian cities, had many large portals, whose enormous doors were closed at night to keep out invaders from nearby Orvieto.


Thinking it over for a moment, I realized there was some truth in his observation but I also took note of the irony in his saying it since he lived in a gated community on Hilton Head Island where the gates were always closed and protected by armed guards. All the world's a village, as they say here, but at least the portals of Todi, Rome and everywhere else in Italy, have had the big doors removed. They've been replaced by cameras which record the presence of cars which have no right to enter. Intruders are dealt with, not by the sword or boiling oil, but with exorbitant fines.


The Chinese may have been among the first to define a national border with a large wall but in more recent times we usually associate that sort of wall building with Berlin and East Germany. Such walls can be effective. The Berlin Wall certainly was. It penned in half of a major European capital for nearly three decades, necessitating a major airlift to provide food and other staples of life to the walled-in residents. 239 people died trying to get over or through the wall but it did staunch the flow of refugees from East to West Germany. The wall did not come down until the regime that had built it collapsed. Will the US effort be as successful?

President Trump wants a wall, a big one, to divide Mexico from the US. This can be dismissed as overly extravagant, impractical, ecologically and aesthetically horrible but the idea of a secure national border is not really outrageous. The US, like virtually all other countries, does have border guards at airports and crossing points to control who is entering the country. At Newark's Liberty Airport, the guards have apparently been indoctrinated and trained at the “rape table” to develop a properly truculent demeanor. This came out in one of the many recent daily scandals so their function may now be fully privatized, with United Airlines a leading candidate to provide future airport security.

While the government of the USA may now favor an absolutist approach to border security on its own borders, it seems remarkably oblivious to the sanctity of other country's borders. In joining with France and England in bombing Libya into medieval anarchy, it committed the equivalent of bombing the border crossing points at Tijuana, Nogales, Juarez and Laredo and opening up the roads into California, New Mexico and Texas. No apologies, reparations or remedial suggestions have come from either the Obama or Trump Administrations. What the French and English were thinking defies imagination. They didn't recognize their own feet when they started shooting. The Democratic half of the American public seems shocked by the isolationist implications of the Brexit and the Trump victories yet, along with the other half of the population, seems totally unmindful of the consequences of American policies.

During the presidential campaign Donald Trump kept insisting not only that he would build a really big wall but that he'd make the Mexicans pay for it. Such talk was met with derision by the media and most of the population. Where did he get such a bizarre idea?

He may have been thinking of Berlin, where the Soviets ordered the wall and got the East Germans to pay for it.

Another precedent comes to mind. In the occupied West Bank, the Israeli Government has continued to build walls to separate and protect its ever-expanding settlements, which the world entire, even the US Government, acknowledges as illegal. Have they gotten the Palestinians to pay for those walls? No, but Israel, with its population of less than 9 million people and its territory slightly larger than New Jersey and slightly smaller than Massachusetts, gets more US foreign aid than any other country. Much of that aid comes in the form of military support but all that aid allows Israel to devote its resources to wall-building on stolen land, so it's not much of a stretch to say that the US is paying for those walls.

Yes, walls can and do achieve some goals. Those in the West Bank by now have probably ended the possibility of a two state solution for Palestine and guaranteed that Israel will not survive as a democratic nation.

What will become of the Great Mexican Wall? Let's look for its advantages. It may bankrupt the United States enough to limit its ability to invade and occupy other nations around the world. Perhaps in a century or two it will become as much of a tourist attraction as the Great Wall of China. Remnants of the Berlin Wall now fetch a good price as people seek to keep a piece of history.


We always need to look on the bright side. Everything has its unintended consequences, occasionally positive ones. It's just that sometimes it takes more time for good things to emerge than most of us have left.
Posted by Robert at 11:17 AM 2 comments: