I wouldn't presume to challenge Professor Toynbee's theory but if he was right, it looks like we're up the creek without a paddle. Rising to overcome a major challenge is difficult but if those threats are not acknowledged, it is all but impossible to overcome them. 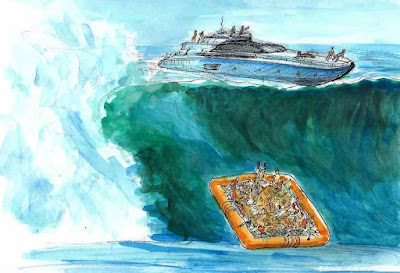 There are two existential challenges to our civilization right now, starting with climate change and moving on to the accelerating gap between rich and poor. The first threatens to make large portions of currently inhabited parts of the world uninhabitable while the second will end democracy as the form of society which has characterized our recent civilization, returning us to some new variety of feudalism akin to that of the medieval world. American President Trump has appointed cabinet officials dedicated to cutting back all regulation aimed at protecting the environment and dealing with climate change, as if telling the musicians playing on the top deck of the Titanic to play louder will make everything better. He is also currently engaged in an effort to loot the Treasury on behalf of his fellow oligarchs. The heist, which goes under the innocent sounding name of “tax reform”, is being conducted under cover of an endless stream of public insults of everyone from foreign and domestic leaders to gold star mothers.

While these two challenges may prove to be life-threatening for our civilization, there are others which might provide a start in our efforts to save ourselves. We badly need some good news and if you look really hard, from time to time you can find it.

Sometimes problems are identified that many of us never knew the existence of. Climate skeptics are still saying that about climate change. In March of 2016 the Governor of North Carolina signed a bill into law blocking cities from allowing transgender individuals from using public bathrooms of the sex they identify with. Who knew that there was a problem? Many of us were not even aware of the growing legion of transgender people or, for that matter, what a transgender person is. Not completely unaware perhaps. I recall a person named Christine Jorgensen being prominently in the news in 1952 as an early recipient of sex change operations. She had started life as George. In 2015, Bruce Jenner, the 1976 Olympic decathlon winner, revealed that he had always felt like he was supposed to be a woman and had recently completed a transformation into a woman, now known as Caitlin. Is this recent surge of confusion over sexual identity Nature's way, or God's way, of responding to the impending population explosion? If so, it doesn't seem to have worked, at least in the case of Jenner, who fathered six children during his three marriages, some even after he had started his transformative treatment.

Then again, we're not interested in divine solutions. We're looking to find human solutions. President Trump's recent toying with the possibility of nuclear war may be a subtle attempt to seek an answer to the problems of overpopulation and mass migration but we can do better than that.

The gender confusion issue is apparently more real than some of us thought. Much has been written about it without shedding much light. The most interesting writing on the subject that I've seen is Sons and Daughters, the village where girls turn into boys, by Susan Topol in the August 2017 issue of Harper's Magazine. For those mystified by the whole subject, it's worth reading. There also seems to be a growing movement involved in promoting the confusion. Some might see the phenomenon as a problem that needs attention as such, but that's not our aim in this piece. We're looking for good news and signs of hope.

In March of 2017, just a year after the Governor had signed the NC toilet bill into law, the law was repealed. What happened? Did the citizens of North Carolina have a change of heart or did all the men there harbor a wish to try out women's rest rooms? Not likely. Instead, groups all around the country, seizing the opportunity to speak out against discrimination against another beleaguered minority, rallied to protest the outrage perpetrated by the NC legislature. Entertainers canceled concerts, sport teams canceled All-Star contests, conventions were relocated out of state and corporations canceled plans to move their headquarters to North Carolina. In Charlotte alone, the Chamber of Commerce estimated losses to the city of $285 million and 1,300 jobs. Money talks! We will deal with the deification of the market at another time. For now, we'll just look at the upside.

On October 1st of this year, a disgruntled white male American brought twenty-three weapons, some of them automatic or semi-automatic, into his hotel suite in Las Vegas and opened fire on a crowd at a concert thirty-two floors below, killing fifty-nine people. More than 500 others were wounded or injured. Thirty-five days later another troubled native-born white American walked into a church in Sutherland Springs, Texas and fired on the congregation, killing twenty-six people. Both of these incidents were horrifying and shocking but not altogether surprising. The US has been averaging about one multiple shooting (defined as at least four people shot) per day throughout the year.

We don't know how many gender confused children were traumatized by public toilet incidents in Charlotte but a huge effort went into saving them from further discomfort. Couldn't a proportional effort be made on behalf of the eighty-five dead people in Las Vegas and Texas and the ones sure to follow? Both places proclaim themselves to be radically pro-gun. Open carry laws proliferate as do military style weapons. All you entertainers who boycotted Charlotte, where are you now? Athletes? I doubt that any of you would want to play in an open carry stadium, and the stadium owners probably don't want to risk damage to their property (including their players) but how about getting to and from the stadium? The Oakland Raiders are scheduled to move to Las Vegas in two or three years. Put your national anthem protests aside and get your agents to stipulate in your next contract that you won't play in an open carry city. Convention organizers, how about crossing open carry places off your list of potential venues. Thousands of people flock to Las Vegas for gambling, divorces and other types of “fun”. Some of them go there for the chance to shoot military style weapons at shooting ranges but if the more normal people all got together and said thanks but we'll do our debauchery in a safer environment, things might change almost as quickly as they did in Charlotte. Ironically, some of us signed petitions requesting that the GOP National Convention of 2016 in Cleveland be an open-carry convention but the politicians, with their own asses on the line, would have none of it. Why should they be more secure than singers, athletes or the general public?

Our prayers can go to the families of the dead, our letters to the newspapers, and our petitions to our Congressmen. We'll feel better for our good intentions and that will soften our resignation. Maybe Putin can do something to help, as he's credited with guiding most outcomes in the US, but don't hold your breath. Do you have college age children? Don't let them attend any school in an open carry state, much less exposing them to an open carry campus. Money talks. Make it clear to all these places that they can have their guns, or some of your money, but not both.

After the gun epidemic is cured, maybe we can move on to the vital issues of climate change and the new feudalism.