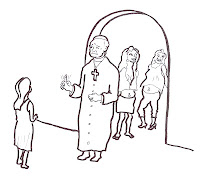 Like fresh air and clean water, you aren't aware of decorum until it's missing. My wife recalls that as a girl she was reprimanded by the parish priest for attending mass in a dress with short sleeves. She was even sent home to change. Nowadays, one encounters the gum-chewing faithful wearing low-riding shorts or skirts designed to show off their navel rings, a display which might be considered redundant, given that the bellies on display are often protuberant enough to draw one's gaze without any embellishment.

From my own childhood, I remember travelling carnivals with freak shows which featured dwarfs, hermaphrodites and “the tattooed lady”. While dwarfs and hermaphrodites don't seem to have proliferated in the interval, tattooed ladies can now be seen, free of charge, in every small town supermarket.

About twenty years ago, one of the young bachelors in the village made a habit of perusing large hard-core pornographic magazines on the steps of the village bar/general store. The old ladies, who have always made up a majority of the local population, would either pretend not to notice, or would walk away in disgust, while the children mostly giggled. At the time, these magazines were crowding out other publications on newsstands throughout Italy. The news dealers scrambled to create large, out of public view, areas to stock such publications, but a certain aura of sleaze permeated all the major outlets. With the arrival and wide diffusion of the internet, this assault on decorum received a fatal blow, as pornography became easily available in every household. Italian newsstands have been restored to the days of old, where the most widely sold magazines are those showing remarkably tanned TV and film celebrities cavorting with their new loves in the chic resorts of Sardinia. These magazines, which feature bosomy stars in low cut dresses and small bikinis, despite being reliably present in every barber shop, seem to be mostly sold to women, which I find strange, but upon reflection, may be no more strange than men reading magazines about heroic sports figures, another top category. We all keep brooding about what (we) might have been.

This summer, which has been characterized by long family visits, hellish heat and a hectic village festa, has brought the notion of decorum to mind on multiple occasions. My grandchildren, all six of them, were present for a part of the summer, and while they are all above average, even exceptional, in every imaginable category, from beauty to intelligence, musicality to cuteness, their progress toward decorum may be lagging slightly behind. I have suggested that navel rings may be out of place in church but, at the same time, toy cars are every bit as foreign to the reverence of the ceremony. I could go on to lament the presence of dogs in church as well, but I'm treading on thin ice here, as I very rarely attend mass myself. However, the church is not the only locale where some concept of decorum should reside. I regard the dining room table, not to mention the living room floor, as being as sacred in its way, as any part of the church. Toy cars, dolls and electronic devices have no place there. Perhaps when introduced to alcohol and other pleasure inducing substances, the children may give up their addictions to plastic and electronic toys, but I fear that addictive behavior itself tends to become a personality trait, rather than just being associated with any one substance.

Among my own addictions, one of the most serious is watching sports. Sky Sports allows me to indulge my habit at little cost, but I have noticed that decorum in professional sports has taken a major hit. When I moved to Italy four decades ago I was shocked to see sports venues here littered with advertising. This cancer has spread, and now the once pristine wall boards of the Madison Square Garden hockey rink are plastered with ads for McDonald's and other commercial graffiti. It gets worse! During the long TV breaks for commercials, disco music is now piped into the arenas at NHL and NFL contests, as well as Major League baseball games. I wonder that there are any live audiences left but I suppose they are mostly recipients of free tickets from corporate sponsors filling their tax write-off boxes.

This summer brought us more tennis than usual, due to the Olympics. While I prefer the blood sports, I've always thought of tennis as being a little bit classier than some of the other sports. After all, at Wimbledon, players all wear white, and the public eats dainty sandwiches in the presence of royalty. However, at the US Open the other day, I noticed that during the breaks, they were piping in the same disco babble that the more proletarian sports have adopted. So much for tennis! I'm calling for Roger Federer to stage a walkout. There's too much money at stake for that, but will Roger, always a paragon of decorum, start learning to do back flips and a little victory dance ritual a the conclusion of a successful match?

With this backdrop of worldwide cultural decadence, I suppose it was too much to expect our tiny village to demonstrate more decorum in our summer festival than major institutions in New York City can muster. Much of the festa went well. As always, the food was good. The home-grown theatrical production was well done and well received, its only defect being that the sound was slightly under- amplified. The following night, that was compensated for by mind rending amplification of the most inane disco pop ever heard since Abba retired. This was Youth Night, youth in Italy being people between the ages of eighteen and thirty-eight. (Before that, they're bambini.) When I complained to the president and other members of the governing committee that the sound levels were grotesque and dangerous, I was told that the youth liked it that way. Possibly so, and perhaps they also like to stand around excavation sites with eight or ten jackhammers in operation. All of these people making that judgment were well over sixty and I'm not sure they know any better than I do what the youth like. Based on twenty year old anecdotal evidence, I would guess that they like porn. Had they decided to put a live porno exhibition on stage in the piazza, would the town elders have shrugged and said “that's what the youth like”?

Times, people and customs change. The fellow who once offended the standards of the village is now an upstanding pillar of the community. I have no idea if his tastes have changed but his hair is now streaked with gray and his comportment is exemplary. Decorum is, after all, simply conformance to accepted standards. Perhaps tomorrow that will simply mean keeping your navel ring polished and lint-free.