My last couple of posts haven't been monuments to the Power of Positive Thinking, but that's nothing new. At my college graduation, Norman Vincent Peale, who coined the phase, or at least made a ton of money from it, nearly caused me to throw up when he spoke at the baccalaureate service. Even then, I had little stomach for militaristic expositions of American exceptionalism. Not wanting to end what had been four good years on an openly bitter note, I resisted the impulse to walk out in protest. Maybe that was the kind of mistake that people of my generation made too often.


Barack Obama is still sounding like Norman Vincent Peale. Nevertheless, there have been signs of hope recently. I can recall from trips to Florida, long before my college years, seeing rugged men wrestling alligators.

They would turn the alligator over and rub its belly, inducing a sleep-like trance. Those gators still had big sharp teeth but for the moment they were rendered innocuous. Last week Vladimir Putin seemed to pull off the same trick with President Obama, tranquilizing Obama's inner Fascist just as he was about to launch another ill-considered attack in the Middle East. In addition to Putin's firm hand, the President may have felt the weight of the polls which showed that his imperial appetite had the backing of fully 8% of the American public. Whatever it took, we can all be relieved that the gator sleeps.

Now we've gotten the news that President Obama has been on the phone with Iran's new president, Hassan Kouhari. That makes Obama the first American president to speak with an Iranian chief of state since 1979 when Jimmy Carter spoke with the about-to-be-deposed Shah.


In other upbeat news, the Senate has removed the extension of the Monsanto Protection Act out of an appropriations bill. It's still in the House version of the bill but there has been so much public outrage at this stealthily inserted provision, which had granted Monsanto immunity from all legal action brought against it, that the chances of killing it remain fairly high.


Larry Summers, President Obama's favorite financial adviser and one of the chief architects and beneficiaries of the Great Recession of 2008, removed his name (or had it removed) from consideration for the position of Chairman of the Federal Reserve, the post Ben Bernanke is stepping down from in January. Although he had his supporters in the White House and on Wall Street, Summers faced opposition from politicians in both parties, as well as from virtually all non-comatose members of the general public.


The other big story of the week is that the Tea Party Taliban is plotting a terrorist attack on the US Government through its Congressional jihadis refusing to fund all government activities (already approved by Congress). Their main target appears to be Obamacare, but some seem determined to cripple Social Security as well. Better to collapse the government than to see the masses having access to health care. If they get as lucky as the nineteen terrorists of 9/11, they could manage to reverse the slow economic recovery and plunge the nation into a sea of rising debt and accelerated collapse. The 9/11 guys probably exceeded their wildest dreams when they brought down the twin towers. Do you suppose that any of them could have imagined that they would end Constitutional democracy in the USA as well? When terrorist strikes begin, it's hard to know where they will end or where they will lead to. Even McConnell and the Congressional loner, John Boehner, seem a little spooked by the jihadis in their midst, but they've lost control. 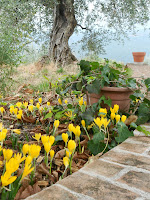 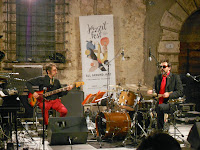 This story may not appear to fit in with the upbeat nature of the earlier items. I may be simply succumbing to a bout of irrational optimism. The crocuses are coming out of the ground; I've recently experienced a wonderful new jazz festival growing out of the ashes left behind by the “austerity” ordered up by the plutocracy; and despite the planet being under unremitting attack environmentally, economically and politically, I've received the news that I have another grandson on the way. Unprecedented optimism or not, I'd like to believe that the GOP jihadis will just blow themselves up (politically speaking that is) without too much collateral damage. I doubt that Ted Cruz will set himself aflame on the Capitol steps if Obamacare isn't repealed, and if his fiery rhetoric does cause him to ignite, he'll get the best health care the country can provide.


It seems that even without this debt limit bomb going off, Mitch McConnell, the Minority Leader of the Senate, has only about a 50-50 chance of being returned to the Senate in the next elections. If the bomb creates unanticipated havoc, he and his co-conspirators are toast. With people like Paul Ryan and Eric Cantor still on the loose, the defeat of one McConnell won't restore the country to political health but it would be a start.


Please take a moment to call or write your Congressman to urge that the Republican National Committee be added to the State Department list of terrorist organizations.
Posted by Robert at 8:23 PM No comments: