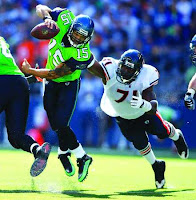 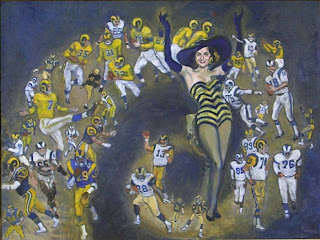 Here in Italy there was a NFL blackout last year on SKY, our monopoly satellite TV provider. Following my resolution to drop the sports package (it requires a year’s advance notice) and who knows how many threatened lawsuits by other disgruntled football addicts, football is back on SKY TV. Not only back, but there’s a tidal wave of football, half a dozen college games from Thursday through Saturday followed by four live NFL games, all of them repeated at various hours throughout the week. After going cold turkey for a year, I feel as happy as Chet Baker in Marrakech. My eyes have been giving out after overdosing the first couple of weekends but I'm modulating my viewing, getting more sleep, and regaining some measure of equilibrium. I’m now fit and ready to join the horde of analysts on ESPN despite lacking 100 pounds of heft and a NFL resume, but they may not be ready for me.

The September schedule has produced an unprecedented amount of last minute game-changing heroics but my early analysis is focused on names and uniforms. In the early years of my football fandom when about 70% of the players were Polish-Americans from western Pennsylvania, many were named Joe, Johnny or Dick, with a sprinkling of really big guys named Alex. Rare names were truly rare. “Doak” still comes to mind. Of course the South produced a lot of Joe Dons and the Bobby Joes. As African-Americans increasingly entered the league, Roosevelt became a popular given name. In addition to one of them, my own beloved Rams had two Deacons, Deacon Dan Towler and Deacon Jones, whose number was finally retired just last week, more than three decades after his own retirement. With African-Americans now achieving even greater dominance than the Polish steelworkers once had, the names have become ever more interesting. While Jamal and Jabbar have taken the place of Joe and Johnny, we also hear of Jamarcus, Jacory, Keyshawn, Knowshon, Ladainian, Laveranues, Erick, Plaxico, Rashard and countless others. While I am a strong believer in original and well thought out names (other than the Madonna all graven images in my house are of a man named Thelonious), my inner conservative is consoled in seeing the Seattle Seahawks with a quarterback bearing the classical name Seneca.

The Seahawks typically wear what I considered the drabbest uniforms in the NFL. What they call teal looks like two shades of blue-gray in the Seattle rain. This is football, not the Civil War, and part of the joy of my childhood was seeing the parade of visiting teams in different vibrant colors. Other people may have made the same complaint. A week ago the Seahawks came out in shirts which appeared to be fluorescent lime green highway safety vests over the usual gray sleeves, possibly the ugliest sports uniforms ever seen, but you can judge for yourself. See above.

I’ve never set foot in Cleveland, Anaheim or St. Louis and spent only one night in LA, but I’ve been a life-long Rams fan, largely due to their uniforms. (It helped that the QB was married to Jane Russell.) They wore bright sun-yellow jerseys when all over America the choice was between red, white or blue. “Yellow” was synonymous with cowardly and “yellow journalism” was in disrepute before it became the norm. so the yellow was called gold. Those jerseys were replaced for a while in the 60’s because yellow didn’t show up well on b&w TV. Bright yellow, always called gold, is popular in California, with USC, UCLA and Cal all wearing it in combination with other colors. After the Rams moved from California to St. Louis and won a Superbowl in their somewhat garish yellow and blue and white outfits, they switched to a more sedate beige-like “true gold” and blue, more suitable to the Midwest. Since then they’ve nose-dived steadily to where they are now clearly the worst team in the league. I’m hoping to see a return to respectability, but at the least, a return to yellow gold.

The Rams also were the first team to decorate their helmets, when in 1948 a halfback named Fred Gehrke, who had majored in art, came up with the idea of painting rams’ horns on their helmets. Logos now give a strong sense of team identity to all but one or two teams in the league; a function perhaps more successfully carried out than their original one, which was to protect the wearer. A study released last week showed that retired NFL players between the ages of 30 and 40 have an incidence of dementia and Alzheimer’s 19 times that of the population at large. No similar study has yet been done on the rate of dementia in retirees who watch upwards of nine hours of football each week.
Posted by Robert at 5:32 PM No comments: