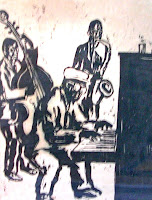 On 22 August 22nd, 1958, while bar hopping in lower Manhattan with a friend from college, I stopped in at the Five Spot Café on Cooper Square to hear Thelonious Monk.  I was already a jazz enthusiast but I’d never seen nor heard anything like Monk.  He played his own compositions featuring strange chords and infectious rhythms.  While the other members of his quartet played their solos, he’d get up and shuffle around in a little dance, seemingly oblivious to everything but the music.  I subsequently went to hear Monk in many other places such as The Jazz Gallery, Town Hall, Randall’s Island and even Central Park.  His records began to dominate my record collection.  When I was introduced to printmaking, my first woodcut was of Monk.  I've drawn and painted musicians for years but the most compelling image for me was always Monk.  When Michelangelo painted The Creation of Adam, he depicted God as a muscular man with a long gray beard.  Were I to undertake such a project, I could just as easily imagine God as a well-dressed, stocky black man in a strange hat dancing around a piano where he has just established the rhythm.

On a recent trip to England I was able to pick up a copy of a new biography, Thelonious Monk, The Life and Times of an American Original by Robin D. G. Kelley.  It’s a massive, scholarly dissertation, which took Mr. Kelley fourteen years to research and write.  Monk’s life is documented from his family origins in North Carolina through his death in 1982 in twenty-nine heavily footnoted chapters.  Just the acknowledgements of assistance in the book’s preparation take seven pages. 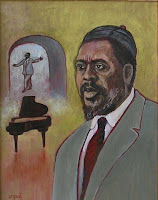 What emerges is a story of total dedication to music, with more than its share of tragedy, yet laced with humor.  Monk was a funny man and humor is there in much of his playing and comments.  He suffered from what has come to be known as bi-polar disorder, yet his playing was prolific, even if his recording was not.  Monk left school at sixteen to play in local clubs in his San Juan Hill neighborhood on Manhattan’s West Side.  Apart from touring the country for two years as pianist for a woman evangelist, he continued that pattern until he was hired as the house pianist at Minton’s Playhouse in Harlem at the start of 1941.  It was his first regular job and he was twenty-three.  There he learned from older musicians and taught the younger ones.  When bebop took off after the war, musicians he had played with, such as Dizzy Gillespie, Charlie Parker and Bud Powell, started becoming famous and had steady work, both at clubs and in recording studios.  That eluded Monk until the fifties.  Known and revered by the jazz community, Monk really only came to the wider public after getting a long engagement at the Five Spot in 1957.

Several themes permeate the book, beyond or behind the music: the women in his life; the effects of drugs and racism in the environment, and the irony that his long delayed success and critical acclaim never brought him the financial rewards that would have been expected.

Thelonious, who was named after his father, was supported, physically, morally and financially by three women in his life.  His mother Barbara took her three children to New York when Thelonious was four years old to get them out of the poisonous, racist atmosphere of North Carolina.  She raised him amidst considerable adversity and helped support him through many lean years.  He married Nellie Smith, the sister of his best friend, in 1948.  Nellie was his wife, closest companion and mother of his two children, personal manager and chief caregiver until his death in 1982.  However, through most of his career he had a patron and friend in Baroness Pannonica de Koenigswarter, a Rothschild heiress.  Monk met her in Paris on his first European tour in 1954.  She had married Baron Jules de Koenigswarter in 1935 and had two children before the war and three more after it.  Both Nica and her husband were decorated war heroes but following the war, the Baron became a career diplomat.  She grew bored with the diplomatic routine and they separated.  Her love of jazz took her to New York City where, to the chagrin of the management, her suite at the Stanhope Hotel became a second home to jazz musicians.  Charlie Parker died there, and two decades later, her house on the Palisades, overlooking mid-town Manhattan, became Monk’s home for the last nine years of his life. 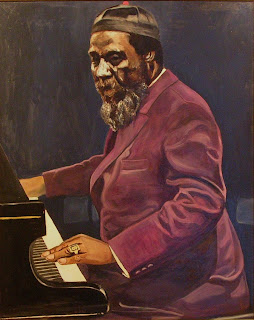 Monk’s life and career spanned a period of extreme racial turmoil.  His mother took him out of the south, but San Juan Hill was not without its own racial tensions, and the young Thelonious had to fight his way to and from school.  His oft-cited moodiness may have been a symptom of his manic-depressive imbalance but the frequent reports of racially motivated killings contributed to it.  Monk played many benefit concerts for civil rights groups but he didn’t talk about it much.  He was scheduled for a Time Magazine cover story on Nov.28th, 1963. His image was replaced by that of President Johnson, following the November 22nd assassination of JFK.   The Time cover story would eventually appear three months later.

Drugs surrounded him.  He lost a nephew and countless friends and colleagues to drug overdoses.  At times, Monk was the only member of his quartet not addicted to heroin.  While he escaped addiction, his career was hindered by his arrest and thirty days of jail time in 1948 for possession of marijuana.  That cost him his cabaret card and the ability to play in NYC jazz clubs for a decade.

Time had written its cover story and Monk had a successful 12 city tour of Europe to introduce his first record for Columbia, Monk’s gross income reached $78,680.  However, after deducting travel and recording expenses, salaries, commissions and taxes, he was left with a net of $33,055.  Despite continuing to tour and play fairly regularly, that net had declined to $17,735 in 1966, not really a princely sum for a musician acclaimed around the world.  It got worse from there on.  His last recording date was in 1972.  In 1973 he withdrew to Nica’s house and only rarely played in public after that.  Two concerts at Carnegie Hall in 1976 were his last public performances.

Reading through the stories of a vast number of musicians whose lives were cut short by drugs brought up some personal thoughts.  In Gay Talese’s book on his Sicilian roots, Unto The Sons, the story of how the Sicilian Mafia facilitated the way for American troops to move through Sicily and up the Italian peninsula is illuminated.  It’s well known that the Mafia collaborated with the US Government to keep the Communist Party out of power in post-war Italy.  What is less well documented is the theory that some part of the government conspired with the Mafia to sedate the frustrated black masses in American cities through the supply of massive amounts of heroin.

People, and young people in particular, are incredibly influenced by peer pressure and by what’s going on around them.    When Monk’s peers in New York City were dying like flies from heroin, I was growing up in the nearby white suburbs.  The main commercial and peer pressures that we faced were to wear dirty white buck shoes, to smoke cigarettes, and to dance the Twist to the music of Chubby Checker.  I gave in to the first, but I found cigarette smoke so repulsive, and most pop music so irritating, that I never really succumbed to the others.  However, I was influenced by other people around me.  The father of my neighborhood friend smoked wonderfully aromatic cigars and my proximity to them started a lifelong habit.  Later a college friend took me by the Jack Daniel’s distillery in Lynchburg, Tennessee,  introducing me to another substance I’ve used and abused ever since.  Indeed, at this time every year, I look forward to a pumpkin pie laced with Jack Daniel’s Old No.7.  The influences we’re subjected to in our youth cast a lasting shadow on our lives.   Some are more fortunate than others.

This week many of us are following the pilgrims’ tradition of giving thanks to God for our survival, our food and shelter, and our family and friends.  In doing so, I am adding another personal thanks for being born in the right time and place to be exposed to one of the greatest artists of the twentieth century.
Posted by Robert at 11:02 PM No comments: