The Ninth Circle of Heaven 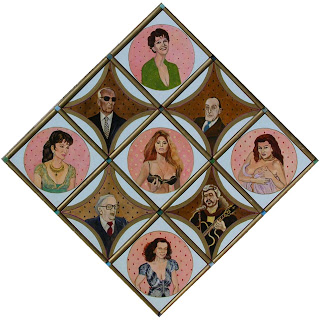 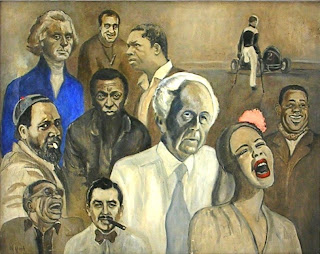 Monotheism can be a drag. It inhibits our natural human tendency to elevate revered figures to the status of gods. I’ve been building my own pantheon from the worlds of sports, politics, cinema and especially jazz all my life, evidence of which can be seen here. This One God concept is in direct contrast to our highest goals of democratic capitalism, i.e. maximum consumer choice.

One might think that monotheism would bring the peoples of the world together, but the Middle East alone has spawned three separate monotheistic traditions. While neither the Jewish version of an eye-for-an-eye God nor the Islamic version of a God urging perpetual jihad has done a whole lot for world brotherhood, one would think that Christ’s message of loving one’s neighbor as thyself could have helped us all get along, but the idea never gained much traction, no matter how numerous His professed followers have become.

In our polarized society it seems only fair that I should be able to worship Venus and Bacchus while my Republican friends openly profess their devotion to Mars. For some time now Neo-Cons have elevated Ayn Rand to the status of goddess, despite public protestations of devotion to the One God. Some prominent GOP figures of a strong Christian bent have recently been confusing their constituents and their congregations by appearing to have divided loyalties. Those good folk in SC and NV should remember that Jesus Himself said: “Render unto Caesar the things which are Caesar’s…”, suggesting His acknowledgement of dual loyalties.

The Catholic Church has accommodated our irrepressible urges toward polytheism through the creation of saints. This works up to a point, but its limitation is in its insistence that its saints measure up to the relatively conventional standards of piety exalted by monotheism.

Working within the limits of Catholic tradition, Dante Alighieri elaborated the various regions in Hell with spaces reserved for every species of sinner. Alas, Hell has fallen out of fashion lately; other than in the occasional invective that we hurl at our enemies, “May you rot in Hell”. However, references to Heaven still do occur with some frequency, as in ”she’s moved on to a better place”

Following Dante’s lead, (but not too far) I would suggest that that there are different circles of Paradise. Our Muslim brethren have led the way with their special designated zones for martyrs, but the fascination with people of self-destructive urges is not confined to Islam. We regularly assign our greatest esteem to people with such tendencies. My personal jazz pantheon may feature Miles, Monk and Trane but the real gods of the jazz world remain Charlie Parker, Billie Holiday and Chet Baker, whose sublime skills were matched by their unrelenting urges toward self-annihilation. Still, they remain minor gods, since their talent was never appreciated in the wider society.

There is a special circle of heaven reserved for the celebrity gods, those larger than life personages who capture the imagination and devotion of the teeming masses. Many aspire to it but few arrive. The requisites for popular canonization are ambiguous but surely, Blondie’s advice to “die young, stay pretty” is fundamental. A long productive life and happy dotage just won’t cut it. We’ve seen Liberace lose his spot in celebrity heaven by overstaying.

The good news is that the elite ninth circle of heaven is now complete. Michael has joined Elvis and Diana to form the perfect triad of popular gods. At future memorial ceremonies marking the decades, a larger number of the weeping matrons placing large bouquets at the various temples and shrines will be black, which seems only fair in this day and age, although in truth, at recent appearances Michael seemed almost as white as Diana. Never mind. Michael’s shrine at Neverland will rival that of Graceland. Despite the news that Diana’s shrine at Althorp House has been closed due to a diminishing number of visitors, we’re confident that when William eventually ascends to the throne, pilgrimages and worship services will return to levels of the glory days.
Posted by Robert at 12:26 PM