Scandal on the Airwaves 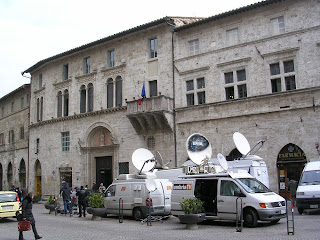 Last week I was watching Fox News, something I rarely do unless Julie Banderas is wearing a particularly sexy outfit, but that day they carried the Senate grilling of Ben Bernanke live, something CNN decided to forego.

After cutting away from the Senate hearings, Fox turned to the top stories of the day, the first of which was the Tiger Woods scandal. It wasn’t clear then, and after some days of further reportage, the nature of the scandal still hasn’t revealed itself to me. He apparently drove his SUV into a tree and/or a fire hydrant, which miraculously revealed that he was cheating on his wife, who may have added to the damage incurred in the crash. I admit that my interest in golf ranks right along with cricket, another sport I’ve neither played nor watched. He may be the best golfer in the world, a bad driver, and worse husband, but I’m not sure how this “scandal” made the cut. Nobody died, not even a dog.

We hardcore sports fans all know that Michael Vick served two years in Federal prison for raising vicious pit bulls, getting them to fight, and then killing the ones who weren’t vicious enough. He got time off for good behavior; apparently there being no dogs at the prison. Now that was a real sports scandal, although should he ever decide to apply for a job as an assistant to Dick Cheney, or with one of our leading defense contractors, it might look good on his résumé. I recall that in the off-season, another famous QB was alleged to have gotten a Las Vegas waiter fired for asking a young lady in his entourage for I.D., and then (allegedly) proceeded to rape a waitress in the same hotel. Charges were dismissed. Everyone loves a dog but we’re apparently more ambivalent about cocktail waitresses, who are supposed to know how to treat famous sports stars. I don’t believe that story qualified as a scandal worthy of Fox coverage.

The second big story of the day certainly did. The jury in Perugia, after a seemingly endless trial, pronounced Amanda Knox, as well as Raffaele Sollecito her Italian boyfriend at the time, guilty of the 2007 murder of Meredith Kercher. Whatever else can be said about the trial, which went on for about a year in scattered two day bursts of testimony, it shielded countless bars, hotels and restaurants in Perugia from the full brunt of the economic turndown, as journalists from all over the world repeatedly descended on Perugia to file updates on the case. It may have been the biggest boon to cable news since the O.J. Simpson trial.

The lead correspondent for Fox News was none other than Amanda Knox’s father, who dutifully reported that we all knew that Amanda was innocent, now it was just up to the jury to acquit. After the guilty verdict was pronounced The New York Times weighed in with a statement from Columbia University law professor George P. Fletcher saying “I think this is a scandal of the first order”, a statement which will insure him of frequent paid appearances on Fox News for the foreseeable future. He continued: “I don’t think this is an expression of anti-Americanism”.. but the verdict came about because the Italian judicial system has not “adapted correctly” to the American judicial system. Alas, Cheney-speak comes to the world of academia. Watch out Italy! The last country accused of not adapting to American standards was Iraq, and look at it now. Any day now we can expect some professor of commerce at Boise State or Yale to demand that the world drop the metric system and adopt the US (formerly British) Imperial Standards.

I confess that nearly two decades ago I wrote in unflattering terms about the Italian judicial system, where verdicts can be appealed by both the defense and the prosecution for two successive levels of review. There are other peculiarities but, as in all judicial systems, there is tension between the fairness of the process and the justice of the outcomes. Despite concern about the procedures and timing of the investigation in Italy, the Italian public appears to believe in Amanda Knox’s guilt in about the same proportion as Americans believed in O.J. Simpson’s guilt. Lucky for O.J. that some of the doubters were on the jury.

Among the American criticisms of the trial, there was mention of civil damages awarded by the jury in a criminal trial. Is this so outrageous? Despite his acquittal in a criminal trial, O.J. Simpson was effectively retried for the same crime in a civil trial, and found guilty of the crime he had been acquitted of, despite constitutional guaranties against the double jeopardy that incorrectly adapted Italian courts routinely impose. The defense in the Knox trial complained that no motive was established; yet they also complained that her character and behavior were improperly examined during the trial, something which might reasonably be deemed relevant to establishing motive.

We can quibble with the niceties of different judicial systems, and had this all happened ten years ago, I might not have taken exception to Professor Fletcher’s comments. However, he lives in a country where the Supreme Court effectively appointed George W. Bush president, a scandal of somewhat greater magnitude than anything associated with Amanda Knox. Among his own appointees, the President selected a young law graduate from a Pennsylvania Bible college, whose dedication to the Party trumped her oath of loyalty to the Constitution, to select and deselect all top US Prosecutors. His “Justice Department” authorized torture and the suspension of habeas corpus. With a murder rate five and a half times that of Italy, there are about 15,000 murders every year in the USA. The United States executes more than all but five countries in the world (places such as China, Iran and Iraq). DNA evidence has shown that in a significant percentage of these cases, an innocent person has been executed. I don’t know what Professor Fletcher could call this other than murder by the state.

Professor Fletcher’s time and effort might be better spent trying to improve the judicial system in the United States before he takes on the shortcomings of Italy. Then again, that probably wouldn’t help his chances of getting lucrative appearances on Fox News.
Posted by Robert at 12:00 PM

Email ThisBlogThis!Share to TwitterShare to FacebookShare to Pinterest
Labels: Italian life, US issues