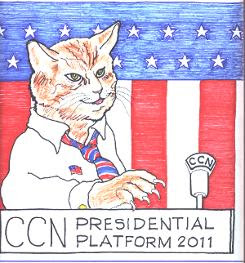 Four years ago we posted on our punditalia.net website our 2008 Presidential Platform, a list of forty-one moderate proposals as to what an aspiring president should set as goals to make the USA a better country. Barack Obama was elected and four years later, one out of our forty-one suggestions has been partially carried out, when some US troops were redeployed from Iraq to Afghanistan. Meanwhile, strident neo-cons such as Paul Ryan have consistently made headlines by proclaiming the need for radical measures designed to eliminate the middle class and transfer its wealth to the richest 1% of the population. Such demands have been accompanied by threats to shut down the government if all non-military expenditures are not slashed.
While we stand behind our 2008 platform, it's time to stop pussy-footing around and raise the volume as we pare down this year's goals to the essential.
17. Now that we've seen Barry Bonds standing trial for lying to Congress and a Grand Jury under oath about his personal use of performance enhancing drugs, we believe that The Justice Department should take a similarly tough stance with regard to other members of the citizenry, less famous perhaps, but more closely linked to the health of the nation. A few prominent and well documented examples come readily to mind. Donald Rumsfeld, Colin Powell and George W. Bush all lied to Congress about WMD in the run-up to the invasion of Iraq. Chief Justice John Roberts stated under oath at his confirmation hearings that he was opposed to judicial activism, yet he has proved to be the most activist Chief Justice in Court history. Members of various intelligence agencies lied to the Congressional Committee investigating 9/11 about what was known to them about the imminent attacks on the WTC and the Pentagon. The list is long and while we don't condone professional athletes breaking their rules, we consider government officials violating the Constitution, and banksters devastating the economy, to be more deserving of immediate Congressional oversight and subsequent prosecution.
Posted by Robert at 8:58 PM