With the opening of the new Todi Hospital in Pantalla, eight kilometers to the north, Todi has finally entered the twentieth century. Remember, the one in which each significant bit of human interaction was bracketed by a trip in a car? Members of the medical professions are delighted with the new modern facilities and potential patients in the area, heretofore apprehensive about questions of sterility in the operating rooms of the old non-air-conditioned hospital, will be reassured by the tidy new building. 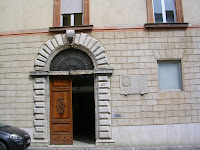 I may find myself there one day, just as I have been a patient in the old hospital. Thinking back to a painful 16 kilometer race to the emergency room, I can only hope that any future trip to the more distant facility will be under less urgent conditions. At the risk of compromising my journalistic objectivity, I must admit I was fond of the old hospital. Although we knew at least two people who unexpectedly failed to survive routine treatment at the hospital, the food was good and the staff friendly. While there for nearly a week, I was cheered up by the stream of visitors casually dropping by to say hello. Over the years, when we've known that somebody from our village, or a neighboring one, was in the hospital, we've gone in to see them when we happened to be in Todi. Times change and I suppose patients will just have to get used to the TV for company.
Italian hospitals provide free basic medical care and all the tests required but for routine functions, such as getting up to go to the bathroom, or help with eating or washing, patients either have family members with them, or they pay someone to provide such assistance. There's no sign that any new system of assistance will accompany the new out-of-town hospitals. Todi is only the latest of these in Umbria. New hospitals dot the landscape outside of Perugia, Orvieto, Città di Castello and Gualdo Tadino. Even in Rome, the newest hospital is out near the ring road, more easily accessible from the airport than from the city center. 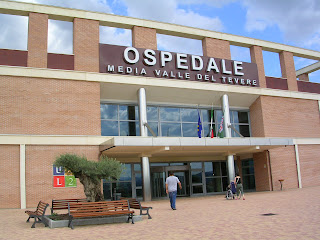 With the possible exceptions of commemorative Presidential Libraries and lavish new sports stadiums, hospitals are the most costly buildings that we build today, mostly due to their technical requirements. It's certainly easier and cheaper to build a new facility on virgin land than to try to renovate an existing and functioning city hospital. For people running the health system, the decision to close the hospitals in Todi and Marsciano and replace them with a new hospital, officially named the Ospedale Media Valle del Tevere, about ten kilometers from each city, may have been a no-brainer, but was anyone involved in the decision who weighed the social costs and other on-going expenses? Clearly, not every doctor, nurse, technician, patient, relative, assistant and visitor lives in the town center, but many do, and most of the rest are scattered around town in a fairly small radius. That translates into an extra twenty kilometer trip each day for every person, in whatever capacity, at the new hospital. In terms Americans can understand, gasoline now costs about $8.50/gallon and is trending upward. Frequent bus service has been provided between town and hospital but those buses have their costs as well. Perhaps the extra transportation costs are low relative to the medical efficiencies involved. But what of Todi, the beautiful medieval hill town that brings people and money to the region in the first place? There is essentially one street in and one street out of the center for cars, with little parking available in the narrow streets. The one traffic lane of the main descending street, Corso Cavour, is shared with nervous pedestrians. Given the risks of being run over, people have ever less reason to walk on the Corso and it shows. Once you walk down the main street about 100 meters from the Piazza del Popolo, its name changes to Via Roma and the percentage of unoccupied shops rises alarmingly. The hospital is at the bottom of the street, at this point called Via Mattioti, just before the Porta Romana in the old peripheral wall of the town. It brought a constant flow of people of people into the area and shops, ranging from tavole calde and snack bars to housewares and clothing shops, thrived there for years. Now the dead zone will metastasize. 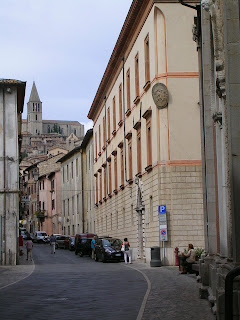 Urban blight is not the sort of disease that the health authorities are asked to deal with. Discussions about closing and replacing the hospital went on for more than a decade during which time someone should have realized what closing the hospital would do to the town. Where were the local, provincial and regional governments? To my knowledge there is still no solid plan for the future use of the old hospital. There is however a plan to deal with the lack of parking and access to the town center. My early guess is that the treatment will kill the patient. More about that in a future article. 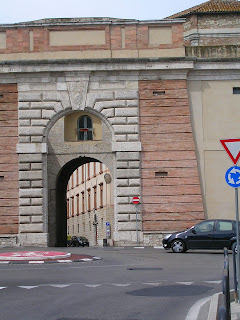 Orvieto had a similar situation when its new hospital was built out of town. In fairness, construction there took about twenty-five years, after politicians managed to misplace the first batch of money that had been appropriated, the building was trashed by vandals, and the project was restarted, so there was ample time to plan. Furthermore the old hospital was adjacent to the fabulous Duomo and the mix of tourists and patients was beneficial to neither group. The ex-hospital has been transformed into a local center for university students from Rome, as well as from several US universities, bringing increased vitality and commerce to the town center.
I visited the new Todi Hospital to take photographs but hadn't planned to use the facility prior to writing this piece. Then my wife suddenly needed to have an X-ray, for which our doctor prescribed an immediate appointment and we drove straight to the Emergency Room entrance to be processed in. After being advised to drive around to the main entrance and proceed to radiology, we chose to walk, probably a bad choice, since although the hospital has many fine features, internal circulation isn't one of them. After finding an exit and walking around to the front, I left my wife to the radiologists and circled back to move the car to the vast main parking lot. Parking, like lunch, is never free and although there is no user charge at the moment, the extensive parking lots certainly added to the cost of the new facility. However, in this case, inasmuch as no one will ever arrive at this hospital on foot, I would propose that even more money be spent on the parking, enough to plant a few trees or even to provide covered walks to allow sickly visitors to traverse the blazing pavements without recourse to emergency treatment. A portion of the hospital facade is recessed at the ground floor level providing a bit of respite from the weather. Why couldn't this have been extended across the entire facade? They were starting from scratch after all, not making do with an old building. 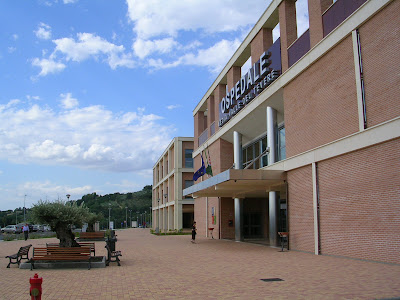 I wish the new hospital all success. My own future may depend on it. A more immediate wish is that the Todi city fathers awake from their coma and start showing the town and its inhabitants a little more respect.
Posted by Robert at 5:49 PM