In a few days the USA will celebrate the holiday formalized to carry on a tradition established by the Pilgrims when they had made it through their first hard years after arriving in New England. They ate a lot of local food, such as turkey, potatoes, yams, cranberries and corn with their Indian neighbors and thanked God for their survival in a harsh terrain, for the food they shared, and for their families and friends. Assuming it really was turkey that they ate, we’ve kept to a similar diet and continued the celebration, with some modern additions such as bourbon in the pumpkin pie and nine hours of football games. Despite having moved to Italy more than four decades ago, our family has always maintained the tradition, since we find Thanksgiving the best of the various holidays celebrated in the US. No competitive gift giving or super patriot bluster with militaristic overtones, just the family getting together over a large meal and appreciating what we have. This description would seem to make Thanksgiving more of an Italian holiday than an American one, since Italians do just that with much greater frequency. We don’t depend on an Act of Congress here. Weddings, first communions, confirmations, birthdays, saint’s days, Christmas and Easter, all provide an occasion for a similar celebration, although the menu is different from the usual American Turkey Day fare.

We now live in a secular society where fewer people are traditionally religious and many, perhaps most, of our acquaintances describe themselves as agnostics or atheists. That makes the idea of thanking God for our blessings a bit awkward but I would suggest that the concept of giving thanks is basic to humanity. All but the most boorish among us, and some spoiled children who never get enough of anything to arrive at gratitude, thank their benefactors. Whether our benefactors are known to us or not, the feeling of gratitude is there. It has little relation to the bounty we enjoy. Wealth, and all that it brings, does not seem to accompanied by a particularly heightened sense of gratitude. Whatever our theological outlook, we can join together to voice an appreciation for what we are blessed with.


When you get to know them well, you realize that all families are complicated and have their unique problems. I am extremely thankful for my relatively serene family, which includes a granddaughter whose seventh birthday we will be celebrating on Thanksgiving Day. She likes to draw pictures of her grandfather and his cat, which means she has a future as either an artist or a diplomat. There are six other grandchildren, their mothers and fathers, all of whom I am also proud of and happy with. My beautiful wife, besides presenting me with our three lovely daughters, has given new vitality to the Thanksgiving tradition by preparing tastier turkey than I ever experienced in the US in my youth. Her daily reminders that I should constantly thank God sometimes create a whiff of tension but our mutual respect is enhanced by our shared devotion to cats. Hers is more inclusive than mine, despite my pretensions of being democratically inclined. That has led to our currently having nine cats, and I am almost happy to have them all. My two brothers-in-law help maintain our house and grounds; one of them even built the house. You can’t ask for better than that. My own brother travels all the way over here almost every year from the US to upgrade and maintain the functionality of the computer I’m producing this blog on, despite my propagating political views on the blog which he vehemently opposes. He must have been listening to the counsel of Gandhi or some such wise person. I give thanks to all. 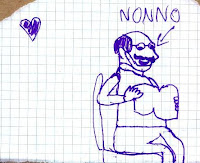 Although our rural village has something like 150 official residents, we also have a large community of people who spend the more pleasant half of the year in the area, and there are a few fellow ex-patriots from all over the world who live here full time. Living in New York and Rome for many years, I never enjoyed such an extensive and varied group of friends. Most of them have now returned for the winter to the cities from whence they came and we will miss them through the damp, dark and foggy months but this year, in the wake of all the theatrical post-election whining and wringing of hands, I will even be grateful for a brief period of solitude and quiet.

The USA has gone through the most traumatic electoral fiasco in its history, leaving an ignorant and incurious man of limited intellect in charge of the most powerful government in the world. Unsurprisingly, this has led to war and the near collapse of the economy of the nation and the world, along with the ravaging of democratic institutions. That was sixteen years ago!  Not all the Plymouth Rock pilgrims survived those first tough years in Massachusetts, but like the ones who got to eat the turkey, I thank God for our survival through trying times. I might hope to say the same thing in another sixteen years but simple demographics suggest otherwise. At least I harbor the dream that all our grandchildren will still be celebrating Thanksgiving then with both gratitude and optimism.

After living through sixteen years of Bush II and Bush Lite, we are now moving on to something different and possibly worse. We waited in vain over eight years for hope and change and now we await despair and change. I’m already tired of the despair but it may prove to be more tangible than was the hope. The new regime is still waiting in the wings. Before we burn down the polling stations, perhaps we should get an idea of what will emerge. The first three appointments are not reassuring but I remind myself that Justice Hugo Black, one of the greatest champions of civil rights ever to sit on the Supreme Court, had been a member or sympathizer of the KKK in his youth. It’s harder to find a glimmer of hope in the case of war loving generals and thoroughbred fascists.

As we look ahead with apprehension, there are a number of things in the political realm that we can celebrate this Thanksgiving.

I will end on some more personal and particular notes. Half a century ago, when applying for a university travel grant, I had to declare where in the world I would want to go. My application to study the hill towns of Umbria may have been more hedonistically than academically motivated and I did not receive the grant. Nevertheless, I’ve had a house on a hill in Umbria for thirty-six years. It and our immediate surroundings have been spared the earthquake damage that has ravaged so much of Umbria just 70-80 km to the east of us.

As the dust settles on the American elections and many Americans consider where to move to, I give thanks that I am already here, where I’ve always wanted to be. The Bush years left us dramatically less financially secure than before but I am thankful that even if the Trump era should bring similar hardships, we will still have medical care available to us.

Last week I was disturbed by the anguished braying about the American President-elect, which just seemed an extension of the same non-stop character assassination that we’ve been exposed to by both sides in an overlong and ugly electoral campaign. For me the election had been over for four months, at which time I heard little of today’s shock and disgust, when it would have been more appropriate. My focus was sidetracked by the sad news that Mose Allison had died.
For all of my adult life, I have been extremely grateful to have had my time on this planet overlap with that of Miles Davis, Thelonious Monk and John Coltrane. Not only on the planet but we were even in the same city at the same time. I’ve had the privilege to experience the presence and the music of those three giants along with a vast number of other wonderful musicians in the golden age of American music. One of those other musicians was Mose Allison, not only a singer/pianist, but a songwriter with a philosophic and witty bent. He lived to see his 89th birthday, not a bad span, especially for a jazz musician. Along with all the other things I have enumerated above, this year I give thanks for having had the opportunity to see and hear Mose Allison.

Roberto, Thanks. You say it all so well. Steve

When did the Pilgrims begin to displace and kill the trusting and generous indigenous inhabitants? Eddie B