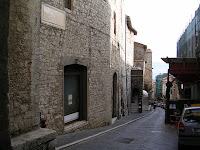 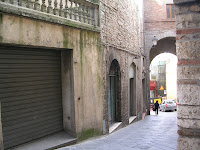 Medieval hill towns, typical of Umbria, but present in most of Italy, grew up as fortified castles on hilltops where both visibility and air quality were good and would-be invaders had an uphill battle. Their massive external walls enclosed and protected artisans and shopkeepers, as well as some of the people who worked the surrounding agricultural land. Little changed in this scenario for a millennium until the advent of the automobile. Still, throughout the twentieth century these old towns continued to provide compact urban centers of remarkable architectural richness, surrounded by unspoiled landscapes.

Indeed, Professor Richard Levine, who headed an overseas branch of the University of Kentucky School of Architecture, starting in 1983, described one such medieval town, our own nearby Todi, as the model sustainable city. The town fathers were thrilled by the good professor’s praise and went on to declare Todi to be the world’s most livable city. No doubt Prof. Levine only intended to identify the urban characteristics in evidence in Todi as qualities to be emulated elsewhere. In what would be an extreme case of the law of unintended consequences, foreigners flocked to Todi to buy up houses and apartments where they could spend two or three weeks a years reveling in this ideal environment. Every third shop in Todi was transformed into a real estate agency and very quickly existing houses were priced well beyond the means of young local people who needed homes. Despite a static local population, a great deal of building has taken place on the periphery of Todi since its fame spread.

The town government has done a reasonably good job (scroll down to “The Sienese Invasion” for a notable exception) of assuring that the new buildings are compact and the materials reasonably harmonious with the existing town. However, when people are compelled to move to new houses, they want those houses to have modern amenities, or more precisely, the basic modern amenity, easy access to a car, and the new housing has provided this access. Despite worldwide evidence that we’re facing energy shortages and that greater urban densities will be needed to sustain our environment and our standard of living, Todi is moving from a compact pedestrian-oriented town to one in which most local movement is by car. Todi’s main street is a narrow passage allowing one lane of downhill traffic and, in most places, one lane of parking. It doesn’t work very well for shoppers who come by car, and merchants complain that the city hasn’t done enough to provide parking. In reality, the city has done a great deal to improve access. In addition to frequent bus service to the center, a large pay parking lot has been built at the bottom of the hill with a funicular elevator leading to the center of town. Existing parking spaces in town have been divided into those reserved for residents and others where people can park and pay with time-stamped tickets from conveniently located machines. In a town so dense and hilly, there just isn’t a lot of space to put cars. The main piazza at the apex has a busy mix of commercial, governmental and cultural activity. Local institutions make a strong effort to promote fairs, concerts, theater, etc. in the town center. Nevertheless, shops along the main street have been closing for years, and once you get 150 meters down the hill from the piazza, the empty shops outnumber those still in business, at least until you approach the hospital near the bottom. More on that another time.

Much of Todi’s revenue these days derives from tourism. The beauty of its setting and its architecture are impressive attractions, but if its economic decline continues, its appeal to visitors will diminish, creating a sad downward spiral. Some of the recent changes were inevitable, others less so. The arrival of large supermarkets signaled the end of the small food shops in the center, just as has happened everywhere else in the world. Nevertheless, small shops depend on pedestrian traffic and it can’t all be tourists.

What’s to be done? Many people have tried to answer this but the decline continues. I don’t pretend to have all the answers, but I do believe more of a stick and carrot approach is required. The town has provided lots of carrots, such as subsidies to people opening shops in the town center, and the amazing variety of cultural promotions. I would propose taxing the owners of storefront properties on the main streets that remain vacant. The owners have to pay taxes on the rental income, an incentive to not rent, but not on the value of business potential. The community spends a fortune to keep the town viable, but by holding out for non-economically feasible rents, these owners are damaging the town by wasting a valuable community resource.

It’s also important that doctors, lawyers, notaries, dentists, accountants and design professionals keep their offices in the town center to insure an ample presence of pedestrians. Unlike supermarkets, these activities do not require a steady flow of bulk merchandise. Many doctors, etc. have already moved to the new residential districts where parking is hardly better, and where the flux of patients does nothing for the town. Whether by stick or by carrot, they should be encouraged to stay in (or move to) the center.

As local residents, what can we do? We can support the various government initiatives to promote the town. More practically, we can patronize businesses in the center, from barbers, lawyers, dentists and shoemakers, to bars and restaurants. Do your banking in town rather than at the strip mall. This violates the theology of the new religion of Convenience as God, but heresy has its own rewards. It may take more time to park one’s car and walk through Todi to a bank in the center than it does to stop at some roadside shack, but for those of us not under inflexible time constraints, the trip is well worth it.