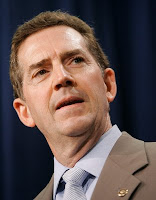 Upon my return from a recent trip to the UK, I recorded my thoughts about British politics vs. those of the US (You can scroll down to “A New Perspective” in case you missed it.) For those of you unfamiliar with the current state of US politics, I refer you to recent events in South Carolina. We’ll just skip lightly over all the sexual shenanigans but something seems to be in the air in the Palmetto State. Could it be powdered Viagra? More to the point is the current reelection campaign of Sen. Jim DeMint and that of his new Democratic challenger, Alvin Greene. While Vic Rawl, a Charleston County councilman and retired judge, was expected to easily win the Democratic primary to challenge DeMint for his Senate seat, Alvin Greene came from nowhere to win his first foray into electoral politics, getting 59% of the vote (although Rawl had received as much as 84% of the absentee ballots in some districts), in a state election which featured electronic voting machines with no paper trail. “Nowhere” in this case was the very modest house in Manning, SC that the unemployed Greene shares with his father after an involuntary discharge from the Army, in which he had served for twelve years. Greene’s place in the race is not yet assured since he faces felony charges relating to showing pornography to a (presumably under-age) SC University student, and because there is some question about where he got the $10,400 for the filing fee, given his serious lack of income or other resources. Daniel Vovak, a Republican who had run against Michael Steele in the 2006 GOP primary for the US Senate, claims to be Greene’s campaign manager.

I confess that Greene’s success has engendered a certain amount of envy on my part. Like Greene, I am short of cash, and even the outside chance of gaining a US senator’s salary and perks has more appeal than most lottery tickets on the market these days. Therefore, I hereby declare my willingness to run for any congressional or senate seat that someone is willing to pay my filing fee for, along with reasonable relocation expenses. Like Mitt Romney, Hillary Clinton and countless others before me, I’m ready to establish residency in any state which provides suitable political opportunity, though since the cost of home heating is so high here in Italy, I would prefer the sun belt. Nevertheless, if Alaska beckons (it seems they're in bad need of new blood) or any other desolate place, I’m open to the challenge.

Unlike Greene, I have no pending felony charges, and I do have a political platform, which won’t be affected by choice of locale, given my foreign residence for thirty-seven years and my regional loyalties to Umbria. My platform hasn’t changed much since my 2008 presidential platform, ignored almost equally by both major parties. Indeed, party affiliation is also no problem. Just as I could provide an unlikely alternative to shoe-in GOP senators such as DeMint, Cornyn or Shelby, I could as effectively provide token opposition to any dysfunctional Democratic incumbent senator such as Nelson or Landrieu.
Sadly, sunny South Carolina, with its charming, sexually charged atmosphere, is out of play, barring a Greene disqualification. Returning for a moment to that contest, there is the prospect of a tough choice that South Carolinians will have to make. Jim DeMint has a perfect voting record, according to the Conservatives Fund, which gives Mitch McConnell only a 79% approval rating. He has consistently voted for all wars, guns, war resolutions, proposals and funding, border fences and corporate interests, while regularly voting against education, separation of church and state, health care, environmental protections and civil rights. Alvin Greene has no voting record at all, and his comment on any issue raised to date has been “no comment”. Still, if he votes differently on any one issue from what Jim DeMint has done until now, or if he never shows up to vote at all, we will see a significant improvement over DeMint’s performance. Weigh your choices carefully Carolinians!
Posted by Robert at 8:48 AM

Email ThisBlogThis!Share to TwitterShare to FacebookShare to Pinterest
Labels: US issues